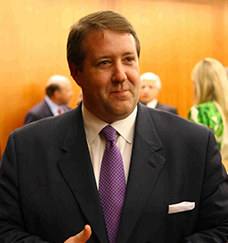 Robert Boland is Academic Chair/Professor of Sports Management at NYU and Co-Professor of the Sports Law Course at NYU Law School. He is also a sports attorney currently representing coaches and management personnel and consulting with collegiate conferences and leagues on strategic and legal issues. He has negotiated over 100 athlete, coaching and endorsement contracts in a variety of sports. He makes frequent appearances in the media as an expert commentator on sports business and legal issues. He was also co-founder and former COO of Global Athletic Management Enterprises (GAME). He worked on major sporting events with United States Olympic Committee, United States Swimming, Turner Sports, and the Southeastern Conference. He was an athletic administrator of Columbia University and the University of Tennessee. He was a student-athlete in wrestling and football at Columbia University, and in 1984 he was a U.S. Olympic Trials competitor in Greco-Roman wrestling.